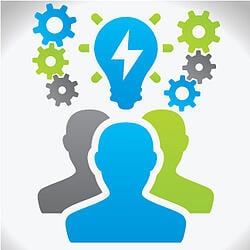 Jason Hekl is a seasoned b-to-b sales and marketing professional. With an emphasis on developing and executing demand generation strategies to accelerate growth, Jason has sourced, developed and closed millions of dollars in new business throughout his 19-year career.

Here is part one of our three-part interview.

Winn: Sirius originally constructed the Demand Waterfall in 2002. What was the purpose of the original waterfall, and what led to its creation?

Jason: This certainly predates my time with SiriusDecisions, but the whole idea behind the Demand Waterfall was to introduce a schematic or shared view between sales and marketing that really looks at the health of your net new business or, more specifically, at the marketing and sales activities that drives your new business. We look at the waterfall as a map you can use to measure the progression of leads through different stages, from cold to close. As Sirius analysts, we use the Demand Waterfall with our clients on a daily basis to help them measure and model the whole demand creation process. So, it’s an effective way for aligning sales and marketing.

Winn: So that was the original intent, just the alignment of sales and marketing?

JH: The Demand Waterfall allows you to put a modeling and measurement system in place based on lead and stage definitions that both sales and marketing buy into. Then you can look at performance throughout the lead management process, in terms of having moved from stage to stage at what conversion rate. And it allows you to create some common objectives that everybody can align to. It is standard practice today for b-to-b companies to plan their demand creation activities against a schematic like Sirius’s Demand Waterfall.

Winn: In 2012, Sirius re-architected the waterfall. What were the primary catalysts that drove the re-architecture of the demand waterfall?

JH: One of the criticisms of the original waterfall is that it was a view of the world that was skewed from a marketing perspective because it started with inquiries, and inquiries – by our definition – are marketing-generated responses to an offer of some sort. So, when we re-architected the waterfall, we wanted to give a more complete view of that journey from cold to close and recognize the different points of origin beyond marketing-generated inquiries. That’s one important driver of the change. Depending on the type of company, 20 percent, 30 percent, 50 percent or more their demand will actually originate from a teleprospecting team or come from sales directly. So, one of the big enhancements with the re-architected waterfall was to create those new stages that recognize that demand can originate from different sources. We also wanted to take into account that there are processes in place that did not exist 10 years ago. We introduced a new stage to capture the important role that marketing automation plays in a lot of lead management processes, because that is a gate that companies feed their leads through for scoring, profiling and prioritization.

Winn: One of the major changes in the re-architected waterfall in 2012 was the inclusion of teleprospecting as a unique qualification source. What drove Sirius to incorporate that role specifically?

JH: In the original waterfall, the role of teleprospecting was very much obscured. It was embedded within what we call the MQL (marketing qualified lead) stage and did not call out the role of that function explicitly. There are some challenges associated with it because sometimes the function sits in sales, and sometimes it's in marketing. So, in the re-architected waterfall, we call out the role of tele specifically because at any organization that has tele, they receive and hand off leads. They play an important role in the lead management process, and now we call it out explicitly.

Those were the three big drivers that drove the re-architecture of the Demand Waterfall and it maps to what we were seeing in practice with a lot of our clients. In practice, more companies model, plan and measure against the original waterfall, but more and more are moving to the re-architected waterfall.

Winn: Jason, that’s a great segue to our next question. What do you feel are the primary roadblocks or challenges for companies implementing the new demand waterfall?

JH: I think inertia is the biggest roadblock or challenge. Companies are used to doing things in a certain way, and when you are talking about implementing the re-architected waterfall, that's fairly significant change. It requires commitment on the part of sales, marketing and teleprospecting leadership, as well as front-line managers and all the individual contributors on those teams. It requires constant communication and buy-in from all levels of the organization.

That's at the conceptual level, but then to actually put the Demand Waterfall into practice, companies need the right data; they need measurement systems. A lot of companies lack formal service-level agreements (SLAs). They might have some handshake agreements on “who does what when” as part of the lead management process, but rarely do they actually have SLAs in place. That's important because it's where you are defining what a lead is, what each stage represents, and how to govern the handoffs from one function to another.

You need an ongoing mechanism to support and maintain these waterfall-related processes. So, it's not something that can be done overnight. In fact, smaller companies have an advantage here because key people are co-located, the company may not have as broad a product portfolio, and they might not be operating around the world. Some larger companies have big product portfolios and multiple business units operating in different regions around the world. Often, they have multiple sales teams for each business unit that may be aligned in different ways.

These are all complexities that need to be taken into account when you are thinking about changing your lead management process to reflect that re-architected waterfall. So, there's high desire to adopt the model, but it takes time.

In part two of our interview with Jason Hekl of SiriusDecisions, we will discuss teleprospecting’s role in reaching decisionmakers, implications of demand center implementations for teleprospecting, and causes and cures of lead leakage.